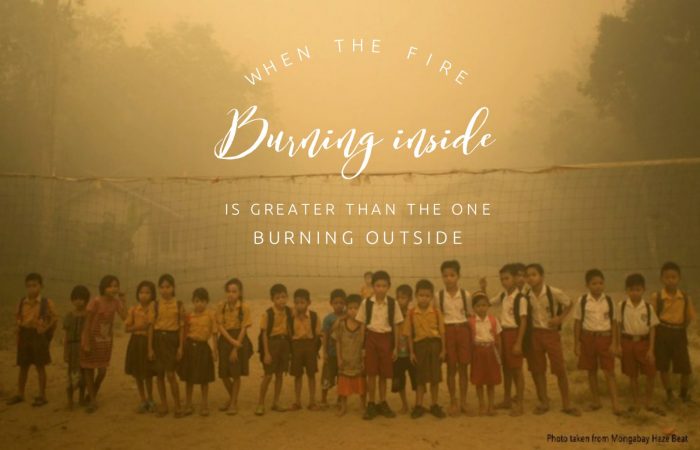 Imagine this. You’re at a gathering at the beach with your friends, you guys have got a barbeque pit going. You walk over to the pit to talk with this friend of yours who was keeping the fire going. As you are about to speak to him about the latest news you’ve received, the wind changes and sends the barbeque smoke up your throat and into your lungs as you take the first breath of that conversation. You choke, cough a little, get embarrassed a little, your eyes tear a little. You turn away from the smoke to breathe a little before you stand at another position to continue the conversation.

Now multiply that incident by the hours we have in a day and minus the ability to turn to a space with clean air. That’s what many villagers, especially the children and the elderly have to face when the Indonesia forests enter their seasons of burning. Many fall ill and die from respiratory issues.

Why are they still burning the forests if there are such dire consequences? One of the major reasons is because of the corporate demand for palm oil. That reasoning did not stack up well for 19-year old Regina Veronica Vanda (Yale-NUS College) at all. So together with her friend Gauri Shukla (UWCSEA), they formed a petition, and these two youths within a period of 4 months, got large corporation Old Chang Kee to switch to a more responsible source of oil. However, it was not as straightforward as it sounds, because mere petitioning online would only fall flat. Besides, it wouldn’t make them any different from being a regular internet troll and keyboard warrior. So we decided to ask her a few questions, dig a little into the wisdom that made the campaign successful, and here’s her story.

Fortunately for us, we had the opportunity of experiencing Regina in our lives personally as a past participant of our core programmes – Inside Out and Level Up, and as a friend now. We hope that this article gives you a glimpse into the possibility of the change she sees that you are capable of making for the world around you too.